With over 200 releases in the last 20 years it is definitely time to have a party. Pete Rivera and Mr. Mellow founded label Lounge Records in 1996, followed later by sister labels Légère Recordings and MUTO, releasing LPs, CDs, 7inches, 12inches and digital publications in genres like funk, soul, jazz and electro. The past two decades have seen four wonderful compilation series (“Music For Modern Living”, “Come On Soul”, “For Adults Only”, “Club Tikka”), worldwide tours of the label’s artists (The New Mastersounds, The Mighty Mocambos, Myles Sanko, Torpedo Boyz) and various official re-releases from the past (The Last Generation, Angelo Tinsley, Jay W. McGee), putting the names of Lounge Records and Légère Recordings firmly on the map of the contemporary funk & soul scene.

Come celebrate 20 years of Lounge & Légère with a super lineup of artists that are sure to keep the party going with funk, soul, disco, boogie, afro, and beats non-stop. Something for everyone! 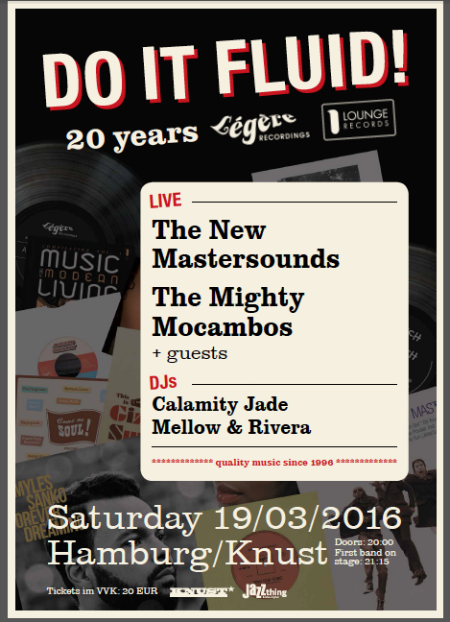