One of London’s hottest club nights, Funk at The Forge, is inaugurating the new season on Saturday September 17th with an absolutely killer lineup! Co-headlining this very popular night are two of the UK’s most in-demand funk acts – The Haggis Horns and Crowd Company. Topping things off will be more live music from Gracie and Willwork4funk boss and DJ Calamity Jade spinning funk & soul goodies from her record bag.

GRACIE
Formed in Leeds, Gracie explores a spectrum of funk, neo-soul tones, hip hop and jazz, fronted by singer / songwriter Grace Convert. Taking a collaborative process of arrangement and drawing from a wide variety of popular genres the group present a unique sound including playful live instrumentation and emotive vocals.

Doors open at 6pm and show starts at 7pm
Tickets: £6 in advance £8 at door
Facebook event here.
Get tickets here. 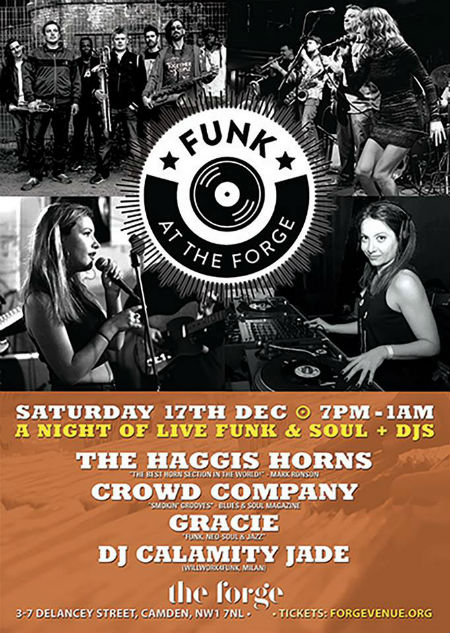