Funk at 229 w/ The Haggis Horns, Crowd Company, Florelie and…

One of London’s hottest club nights, Funk Station at 229, is inaugurating the new year on Saturday January 13th with an absolutely killer lineup! Co-headlining this very popular night are two of the UK’s most in-demand funk acts – The Haggis Horns and Crowd Company. Topping things off will be more live music from Florelie and Willwork4funk boss and DJ Calamity Jade spinning funk & soul goodies from her record bag.

THE HAGGIS HORNS
The Haggis Horns have been at the forefront of the UK funk scene since they drew attention as a horn section on the legendary album “Keb Darge Presents The New Mastersounds“. They went on to form their own full band in 2004 and have three highly acclaimed funk-fuelled albums under their belt, “Hot Damn! , “Keep On Movin” (First Word Records), “What Comes To Mind” (Haggis Records) and recently released new album “One Of These Days“. They have been rocking crowds the world over for years winning fans with their distinctive northern funk sound combining ass-shaking breakbeats, afrobeat, soul and boogie.

FLORELIE
Its been a while since the release of her two 7 inch singles but now Australian soul singer Florelie is back and ready to rock the party! Florelie has been performing nationally and internationally for several years, among her biggest influences are Aretha Franklin, Nina Simone, Stevie Wonder, Michael Jackson and James Brown. 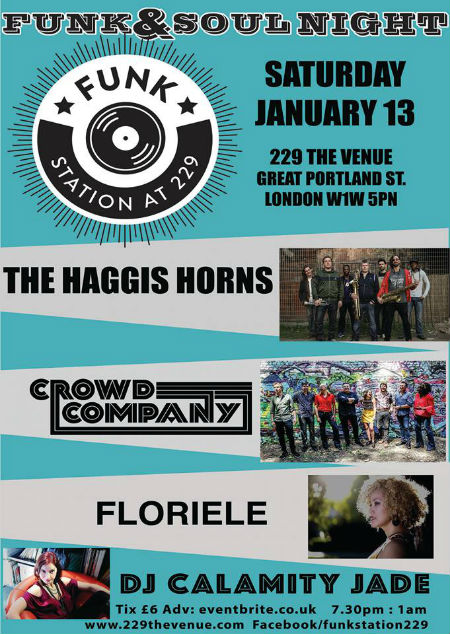