The Mighty Mocambos & Caroline Lacaze for the first time in Milan

WATCH THE VIDEO TRAILER OF THE LIVE SHOW HERE!

The Mighty Mocambos have gained a reputation as one of the most exciting contemporary funk outfits today, catching the attention of many funk enthusiasts around the globe with a myriad of quality releases under their very own Mocambo label, as well as on various other labels across the globe under almost a dozen pseudonyms. Grammy-nominated producer legend Kenny Dope (Masters at Work, Bucketheads) remixed and re-released the group’s obscure interpretation of The Furious Five classic “The Message” on his own label, Kay Dee Records.

The band’s first single with London-based funk singer Gizelle Smith, called “Working Woman”, became an overnight smash and a prime-time club favorite of funk & soul DJs worldwide. The following album “This Is Gizelle Smith & the Mighty Mocambos” received rave reviews, got lots of airplay, and sold a bunch of copies. Its success led to an extensive tour throughout Europe with club dates from Marseille to Oslo and live radio appearances at respected FMs such as the BBC (UK) and Radio Nova (France), and appearances at massive festivals such as the Printemps de Bourges in France.

Their latest album “The Future Is Here” is a manifest of their unmistakable style, with blazing instrumentals and vocals guests such as hiphop pioneer Afrika Bambaataa, Oscar-decorated producer Afrika Islam (aka Charlie Funk), King Kamonzi, and German rare groove queen Su Kramer. Its success paved the way for another European tour, this time with young French soulstress Caroline Lacaze as featured singer.

When not busy producing records for one of their many incarnations and collabos, the band remains steadily on tour through all civilized parts of the continent and beyond. Whoever witnessed a concert will tell you about the musicality, passion, energy, humor and joy that the band loves to bring to the people. The Mighty Mocambos deliver heavy funk with blazing horns, soulful guitars, driving drums and basslines, combined with an extra bit of quirkyness, for an absolutely killer live show that is guaranteed to get feet movin!

DJs Calamity Jade (Willwork4funk), Mao and Soulfinger will be keeping the dancefloor warm before and after the live show, with a heavy dose of funk, soul, breaks, mashups, electro-funk, disco, boogie, jazz-dance and rare grooves! 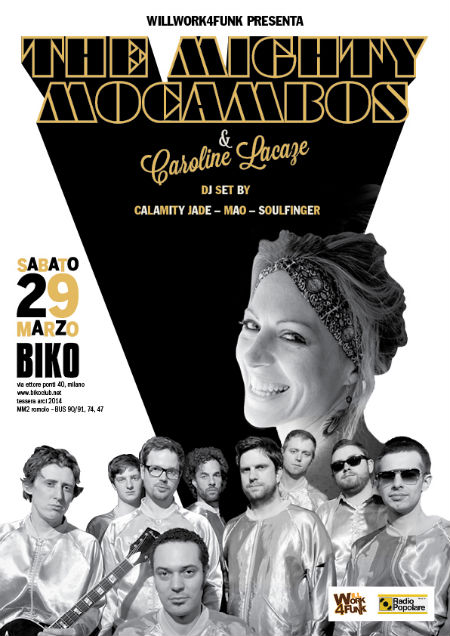