After an endless time of silence around German nu-jazz outfit Bahama Soul Club, they’re finally back to spoil us with their uber-cool vibe and a new album! “Bohemia After Dawn” is the soundtrack of a lifestyle compiled in 12 sun-soaked songs, laid back and lovely, matured and mellow, recorded from the band’s new home in Algrave, Portugal.

Increasingly during production of the album the band became aware of the amazing complexity of local artists, talented individuals to be found performing all day and night in the bars and near the beaches of Algarve. It would take more than a couple of albums to bring these troubadours together. So there are exciting ideas for the future!

For this full-length there’s an eclectic selection of local talent, from Josephine Nightingale who appears in “Mercy Me” to Taly Minkov-Louzeiro who sings in “Troubles all be gone”. The last track on the album “Castelejo” is an homage to the late Vitor Hugo, and features Rui Correia on accordion and vocals by Cutty Wren and Hedvig Larsson. These artists are from the neighborhood, quite literally across the lane. What a blessing, what a discovery!

Last but not least… One of the most exciting voices in the Bahama Soul Club family so far… an ongoing love, Cuban artist Arema Arega is somewhat a permanent feature and shows her talents in “Mango“ and “Alma Sola”. Add to the mix two spicy remixes from the masters of the scene: Mighty Club des Belugas and SMOOVE himself! Nuff said.

“Bohemia After Dawn”, matured for 4 sunny years, doesn’t say “Hey, please like me”. It is just there, in its simple beauty, unobtrusive yet quietly confident. Every song shaped to the max, no compromises. Promise! 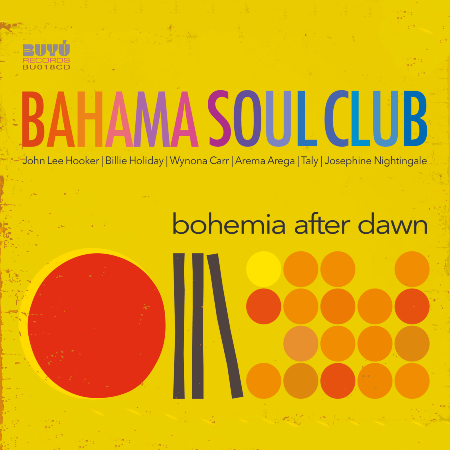