Unless you’ve been living under a rock for the past 20 years, American soulstress Ms. Nicole Willis is a name you’re surely familiar with. Known for her collaborations with The Soul Investigators, with whom she released 3 albums, Miss Willis is now preparing to launch a new full-length album accompanied by UMO Jazz Orchestra called “My Name Is Nicole Willis”, anticipated by first single “Still Got A Way To Fall”.

This new single, available on 45rpm and digital download, sees Miss Willis delve into spoken word, creating a bridge between soul and the essence of hiphop. The track is warm, sexy, cool, deep, funky and powerful. “Still Got A Way To Fall” was composed by Nicole Willis alongside talented musician Jimi Tenor and guitarist Pete Toikkanen from The Soul Investigators, and arranged, as with all the tunes from the new album, by Jimi Tenor.

If this first taste is anything to go by, we’re sure Nicole Willis has created another sureshot winner of an album, and we can’t wait to share it with the world! 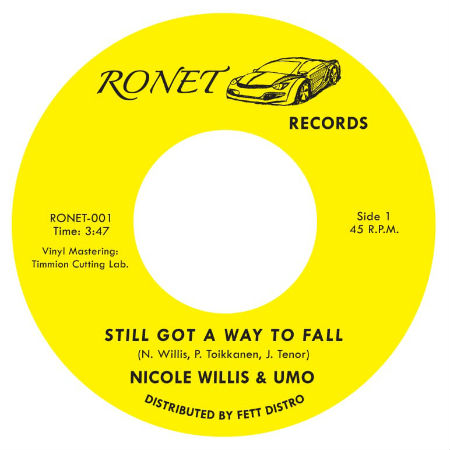