US musician Lucky Brown is back with a new limited edition 10″ vinyl EP on Tramp Records featuring Seattle’s S.G.’s along with The Longhorns, deliverin’ a groovin’ excursion into warm, analog jazz-funk territory.

“Pecan Trees Speak To Each Other” was inspired by the summer sounds of the rustling pecan groves of San Marcos, Texas, where Lucky Brown composed his 2018 album “Mesquite Suite“. Inspiration for the title was found in the writings of Robin Wall Kimmerer in her book “Braiding Sweetgrass” and in southwest poet Wendy Burk’s book “Tree Talks”. Those who care to look and listen deeply, know that the trees are sentient beings and are in a constant and spirited conversation with their kind and the other beings of the forest. Messages delivered in tantalizing silence, like love notes passed in a classroom, are received with heady anticipation through the power of pollen. And underground, in the dark, a living network of messages are conveyed molecularly from one tree to another other through a vast system of mycelia and bacteria. These messages tell the other members when to be fruitful, when to conserve their energy, and when to defend themselves from attack. Of course, there are likely many other ways the trees talk that we cannot or will not ever hear.

The shorter, edited version of “Pecan Trees Speak To Each Other” on side B showcases just Seattle saxophonist and composer Kate Olson on soprano sax and solo, while side A’s version also features Marc Hager (keys) and Colin Higgins (guitar). Recorded by Lucky to 4-track cassette at Bob Heinemann’s Bomb Shelter studio just like the “Mesquite Beat” / “Justice” 45 single, and then transferred, overdubbed and mixed by Lucky and Jason Gray at Blue Mallard Studio, this deluxe 10-inch ’found acetate’ project, the final chapter of the Tramp Tapes imprint series, represents another beloved Brown & Gray production and comes in heavy weight vintage 1960s record sleeves. As a very special bonus, this release includes the brutal rehearsal version for single “’Bout To Blow“ recorded on Ollie Klomp’s world-famous Magik Carpet (the entire “Mystery Road” album was recorded there), and on the flip, you’ll find a living, breathing rough-funk jam in its entirety, “Scavenge Patch Blues”, recorded at the Scavenge Patch as a band warm-up for the “Mesquite Suite” session. 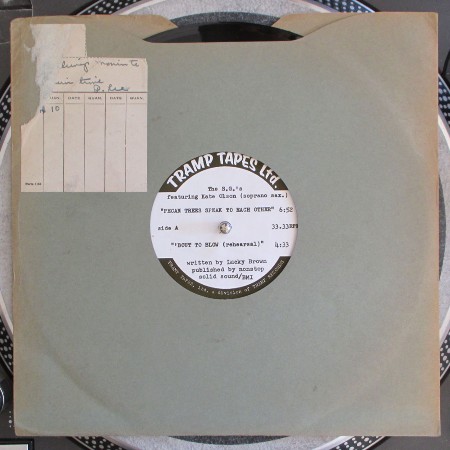