If HornDogz is to be considered a horn section in the first place, it is in particular the project of three cornerstones of the French Funk scene. Eric ‘Shrizzadelic’ Rohner, Gilles ‘C-Freak’ Garin & Rico ‘Adiko’ Kerridge first met in the band Malka Family being part of the founding members. After more than 15 years on the road, together or apart, they reunite under the insuperable Greements De Fortune, band of the French TV program Salut Les Terriens.

In 2010 they replace at a moment‘s notice the brass section of George Clinton‘s Parliament Funkadelic on his European tour and for this occasion were baptized HornDogz by bassplayer Lige Curry. They adopt this name in order to finalize a project they care so much about: “#WOOOF, Your Daily Canine Zine”.

After the release of “Movin’ On” and their EP “Dogfood Vol. 1” now please meet HornDogz again with their first album “#Wooof” in stores by March 31st 2014 available on CD and digital through Musicast distribution.

Out on Uptone Records via CD / Digital on March 31st 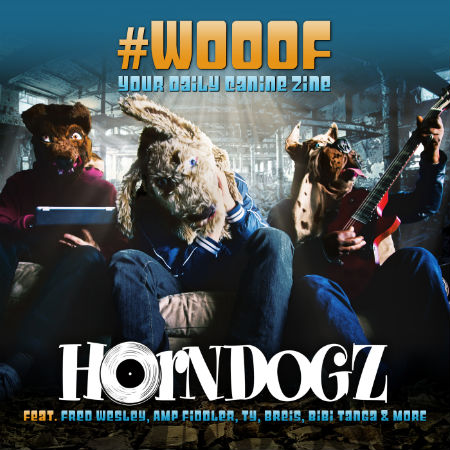