You’ll get in if you’re fancy, free and selected. Step into our “Time Machine” to experience new music in the style of the early and mid-20th century. Get down to the “Luna Parks” of your mind, and with a wave of “The Magic Slapstick”, be ready to draw your “Love Gun”. But be discrete, it might be the exclusive in “Hush Hush Magazine” the very next day!

Tape Five co-invented the electro-swing genre. But they do not play just one style, Tape Five is a brand – a style in itself! The message is a light, positive vibe, brought to you with elements of swing, electro-swing, jazz, dixie, latin, funk, hip-hop, reggae, dub and tango. Everything combined with a strong retro attitude.

You’ll hear all the usual suspects in the skilled Tape Five horn section, and singers Dionne Wudu, Henrik Wager, Brenda Boykin, Iain Mackenzie, Yuliet Topaz and Maria Maschenka appearing as ‘Marlene’. All combined with that special Tape Five production style to serve you something to move to – and something to listen to.

Beside some strong and up-tempo Tape Five styled classics, be open for some experiments in sound: a swinging roots reggae against the babylon system, a funny tango with german lyrics, chilled vibes from the “Topanga Valley” or a message rap about this crazy, “Crazy World”!

This is the 6th studio album of the German based project, that started in 2003… and has since toured from Brazil via Europe to Russia and Korea, with songs selected for TV shows and ads around the globe. That’s the story, believe it…and step right into “Soiree Deluxe”… Welcome! 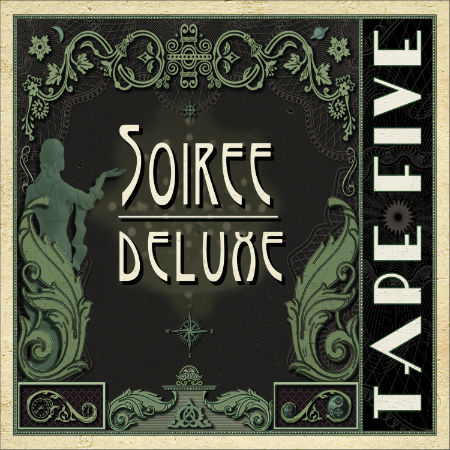