Lucky Brown is the alias and stage persona of American composer Joel Ricci, who conducts myriad combinations of musicians drawn from his Seattle, Washington-based Westsound Recording Collective in dynamic and spiritual public and private happenings. Via his dozens of self-produced experimental deep funk vinyl singles released by Tramp Records over the past 13 years, he has been hailed by music mavens worldwide as a deep funk pioneer.

After a flurry of funk 45 releases beginning with “Don’t Go Away” in around 2008, debut album Space Dream was finally compiled in 2011 on Tramp Records and introduced Lucky Brown’s brand of deep funk and vernacular jazz to the world. The original tunes were soulfully rendered live by his groups The Funk Revolution and Crawdad Farmers and were recorded by Ricci with salvaged, scavenged, and repurposed gear driven by completely naive and improvised recording techniques.

Follow-up full-length Mystery Road was released in 2015 again on Tramp on double-vinyl and as a deluxe 7 x 7″ box, with each single sporting distinctive artwork, unique band names and raw ‘art-brut’ funk blossoming from separate Magik Carpet writing and recording sessions. The concept sought to capture the unfiltered energy and vibe of friends just jamming together in the living room and pushed Ricci’s production modus operandi to its furthest ‘cutting fringe’.

After two compilation-style albums in the form of Space Dream and Mystery Road, Ricci composed the Mesquite Suite. This 5-year endeavor was Ricci‘s album-length missive on the myth and mystique of so-called ‘americana’ cast against a backdrop of the American southwest. The recordings employed Seattle group The S.G.’s, and presented Ricci‘s investigation into ‘place-based funk impressionism’ with the cassette demos for the album having been conceived prayerfully by Ricci while on retreat in an ashram in the Texas Hill Country. Respectful to the concept, Ricci and Tramp entered into an arrangement by which each piece would be released under the newly formed Tramp Tapes imprint. Three 45 singles, the double gatefold LP Mesquite Suite in its entirety, and culminating in an unprecedented modal rock fusion 10″ ‘found-acetate’ EP concept complete with crusty antique 78RPM sleeves entitled Pecan Trees Speak to Each Other.

Deep Blues EP Some Kinda Blues by the Mosquito Hawks is the fruit of a one-off early morning session in a practice room at the Seattle Drum School in 2010 featuring luminaries from the Seattle funk community including fiery guitar phenom Jabrille “Jimmy James” Williams of DL03 renown, versatile drummer Jens Gunnoe and dynamic bass player Bob Lovelace. A tantalizing glimpse of the session was released by Tramp as a single under the name T.D. & The Jimmy James 3 on the extremely limited edition Mosquitohawk imprint, but this EP offers us time to appreciate the transformative alchemy of the session in its entirety. The new EP makes room for highlights that just couldn’t have been contained on one 45, such as the remaining 7 minutes of brutal jamming of “Mosquito Eater”, the New Orleans street party shout of “Hydrangea” and the exalted kind of blues of “Some Kinda Blues”. 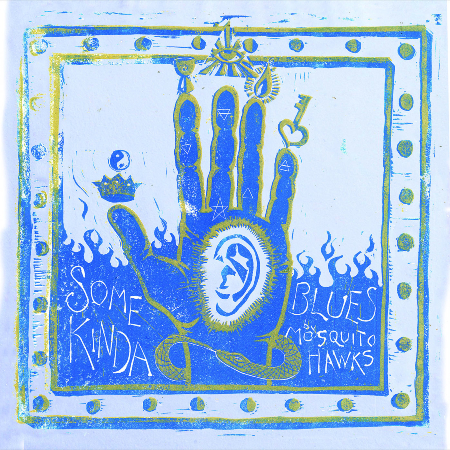