Originally founded in Milan, Italy in 2013 as an independent label, Body Heat is a multi-faceted, funk-fuelled dance project that developed into a club night and a collective of artists, musicians and producers united under the name Body Heat Gang Band. Masterminded by label boss, DJ and producer Rocoe, the intent of Body Heat is to create new music for the dancefloor, bridging the gap between funk, disco, boogie and the world of clubbing, house and electronic dance music.

Entirely self-produced, “Body Heat Disco” is the first full album by Body Heat Gang Band, and brings together all the group’s influences in 10 tracks that give a nod in the direction of commercial pop but with a firm foundation in the independent music scene. Opener “Body Heat Disco” immediately sets the tone with its infectious rhythm that works up to a crescendo of groove. “Grandmaster Chef” and “Venerdì Dinamite” both see the participation of popular Italian rapper Tormento and are each accompanied by a music video. “Play That Game” slows down the tempo and pays homage to 80s boogie jams, while “Fast Food & Champagne” is a modern take on early 90s r&b. Uptempo feel-good number “All The Way High” is a nu disco dancefloor anthem guaranteed to get feet moving. “Out Of Here” and “I Feel The Love” are sophisticated slabs of soulful house with a dance sensibility, and rounding off the album are instrumental “Hoola Bop” and a horn-driven cover of Estelle‘s worldwide hit “American Boy”.

Synths, slap bass, soaring horn lines and bubbling arrangements create a cohesive and exciting collection of tunes aimed at the contemporary dancefloor but with a distinctly retro vibe. More than just an album, “Body Heat Disco” finds it full expression as a live show that brings together singers, musicians, DJs, dancers and more. Body Heat Gang Band draw from the past to step into the future, and you’re invited along for the ride! 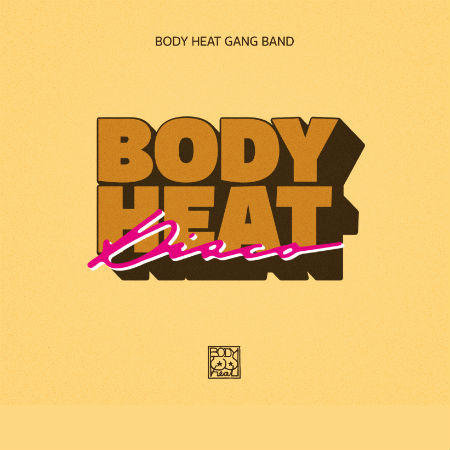