“Lowdown” sees Crowd Company in their finest form yet, with rich songwriting combined with catchy hooks, inventive vocal performances and grooves to die for. Crowd Company are known for their modern take on vintage 70s soul funk and this new release provides just the right amount of unexpected twists and turns to keep things fresh and exciting. The band features three soulful vocalists often blending exquisite harmonies, coupled with virtuoso musicianship in the form of in the pocket heavy grooves, swirling Hammond organ, tight horns and fiery guitar licks. Add to that the analog vibe production from Alan Evans (who also guests on a track) and impeccable mastering from Grammy award winning mastering engineer Brian Lucey and you have yourself a winner indeed!

The album comprises 10 vocal tracks and 2 instrumentals. “Express 76” was the first single from the album and set the stage for the full-length release with its relentless, high-energy groove. The track went on to receive incredible reviews and radio airplay, most notably being championed by Craig Charles on his BBC Radio 6 show. Infectious title track “Lowdown” followed as the second single and continued to build anticipation for the album with its snappy, sassy, sister funk. By the time third single “Stories” was released, it was clear that Crowd Company had tapped onto something really special, just press play for proof!

Album opener “A New Direction” is a super catchy tune with a sunny 60s soul funk vibe combined with some topical lyrics, punchy horns and a sing along chorus, and sees Alan Evans make a guest appearance on percussion and backing vocals. “You Ain’t Ready” and “Free To Choose” are both uptempo, dancefloor classics that are impossible not to foot tap to. “Get Used To It” is a slice of early 70s jazz funk with touches of an evocative Curtis Mayfield, and “Now Is The Time” is a classic Crowd Company funk tune, laden with vocal hooks and harmony vocal interplay between the 3 singers as well as an off the charts Hammond organ solo. While “Change Your Mind” slows down the pace, dripping with soul and passion, and featuring a sublime trumpet solo from Eric Bloom, second instrumental “Orbital” takes things in a completely different direction with a powerful funk workout and a psychedelic flavour, evoking acid jazz and even Egyption melodies.

Possible one of the hardest working funk bands of the contemporary scene, Crowd Company‘s tireless gig schedule seems to have paid off big time: the band have never sounded better! “Lowdown” isn’t just their third studio album, it is a snapshot of a band in peak form, doing what they love, and sharing that with the world. 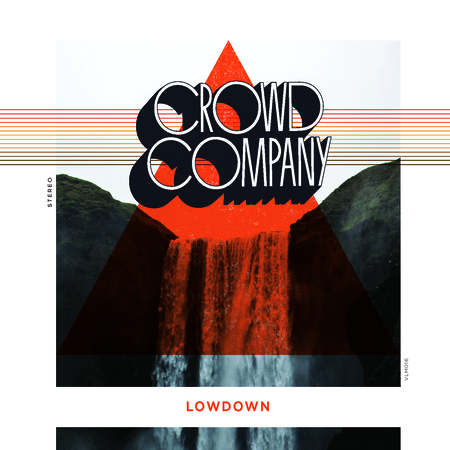