The Jazz Defenders’ debut album ‘Scheming’ out on Haggis Records

The Jazz Defenders‘ debut album “Scheming” is released on Haggis Records, the label started by UK funk band The Haggis Horns. Jazz has always been a massive part of what The Haggis Horns are about so this marriage was the perfect fit.

The Jazz Defenders produce music that is a modern soul-jazz slant on classic bebop and hard bop, effortlessly channeling the spirit of the golden Blue Note era of jazz. The band was founded by George Cooper, one of the UK’s most formidable jazz pianists, who at only 31 years of age has already amassed a comprehensive repertoire of working partnerships including Hans Zimmer, Nigel Kennedy, U2 and The Haggis Horns.

In 2015 George set about choosing some of the finest musicians the UK has to offer to form a group that have since wowed audiences with their superb musicianship and virtuosity. For their debut album, The Jazz Defenders offer an original set of tunes written by Cooper and each member of the ensemble.

Opener “Top Down Tourism” immediately sets the tone from the first notes of George Cooper‘s piano, played in a style reminiscent of Dave Brubeck‘s infectious riffs. “Everybody’s Got Something” is a swingin’ number based around the fun exchange between sax and trumpet, while the titletrack switches things up with swirling organ taking the place of the piano.

In “Late” the bass provides a solid groove for horns and piano to explore melodically, and things take a latin-tinged turn in “Costa Del Lol“, whose title underlines the playfulness of the entire album. “Rosie Karima” slows down the tempo and provides a beautifully intimate and delicate performance, and closing things off is the hypnotic and cool “Brown Down“.

From the first to last track it’s evident The Jazz Defenders thoroughly enjoyed making this album. There’s a connective thread of irony throughout “Scheming“, proving jazz doesn’t have to take itself too seriously to be of the highest quality. 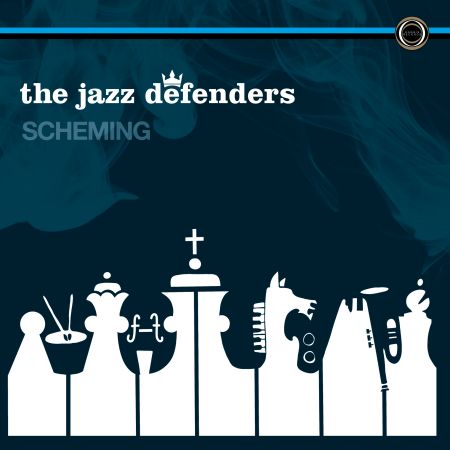