It was into the inviting environment of Parnell’s that Jack McDuff brought his quartet for a week-long engagement in June 1982, featuring Danny Wollinski on sax, an unknown guitarist and Garrick King on the drums. The club’s resident sound engineer, Scott Hawthorn, who made these original private recordings, also just happened to be a keen jazz organist himself, and naturally relished seeing one of the greatest exponents of jazz organ ever up close and personal.

“Parnell’s was essentially Seattle’s jazz club central. On this week-long visit to Seattle in July of 1982, Jack brought his own Hammond B-3, a well-used early seventies model. It featured a warning sign on the back, in red and black, that said ‘DANGER’ and sported scary lightning bolts. He was usually a taciturn man but he also had a sharp sense of humor at times. He could be moody, and able to convey a deep sadness in his playing, and I think that’s one of the traits that made him such a moving player. At other times his style, especially on blues, was joyful with a rollicking beat.”

Stylistically, Jack and his group cover a lot of ground, especially for an organ quartet – from beautifully oldschool funky blues to some frenetic and distinctly edgy fast-paced, solo and ensemble playing. This reflects how Jack’s ears were open to the newer, freer sounds that had developed in jazz and reflected in some of his recordings as ‘The Heatin’ System’ – several tracks have modal and fusion touches that sound remarkably current. Given that the B-3, unlike any other keyboard instrument, can create the dynamics of a big band in a small group setting – and that McDuff is acknowledged as a very accomplished arranger – when this quartet plays standards such as “Satin Doll”, “Lover Man” and “Take The A Train” Jack’s skill and knowledge of the art form shine through along with his obvious love for the masters like Basie, Ellington and Billy Strayhorn.

Some tracks on this record stand out as maybe more exciting than his previously released versions, notably “Another Real Goodun”, partly because he kept adding to and revising his arrangements. Another McDuff original, “Fly Away” captures him right after finding out about the passing of his friend, the legendary saxophonist Sonny Stitt, whom Jack recorded several classic albums with. Before beginning “Fly Away” Jack quietly mutters the words, ‘…rest my head down and cry, y’all.’ That touching moment has been preserved in these restored recordings.

One problem sound-wise was with Jack’s Leslie speaker. As Scott explains: “His Leslie 147 speaker cabinet had a rip in the bass woofer. The thing sounded fine until he would step on a Bb or A bass pedal and then a very loud ‘buzzzzz’ ensued, Jack ignored it and played the hell out of the pedals anyway.” In addition to the prominent buzzing, time had taken its toll on the original recordings.

Enter Claudio Passavanti, the big boss of mastering and audio production company Dr Mix, who is not only an expert in contemporary music technology, but also a classically trained pianist, equally adept at jazz. And so, a long and painstaking process began going through the recordings second by second, removing individual noises and faults one by one. Finally, after 4 or 5 times going through that process and when the most balanced result was achieved, Claudio then mastered for the CD and digital formats – preserving the feeling of the original recordings but minus nearly all of the audio imperfections. For the vinyl version of Live At Parnell’s, Frank Merritt at renowned London cutting house The Carvery was approached, and he then tweaked Claudio’s work further, specifically to cut the lacquers for vinyl.

Listeners on all formats of this album will still hear in places, remnants of the original tapes imperfections, and occasional touches of the buzz of Jack’s torn Leslie speaker. But all things considered, especially when compared to the recordings as they were, only the most cynical critic would say the end results were not worth the considerable effort. That’s the technical caveat… but in jazz organ vernacular, when Jack applies some of his B-3 BBQ ‘hot sauce’ on tracks like “Make It Good” you’ll dig how he’s put a pot on and is cooking with gas! Flip that and his tender mastery and control on classic ballads like “Lover Man” and you’ll just swoon…man…

What Live At Parnell’s actually provides is a fascinating glimpse into a genuine example of living the jazz life, an artist doing what he’d been doing for over 20 years at that point: hitting the road, B-3 organ, bass pedals, bench, Leslie speaker and band mates in tow; getting out to play to the people, spreading the good vibes, having fun and of course, getting paid some bread for doing what you love. Taking the rough with the smooth, but delivering the goods onstage… come rain or shine… every time. 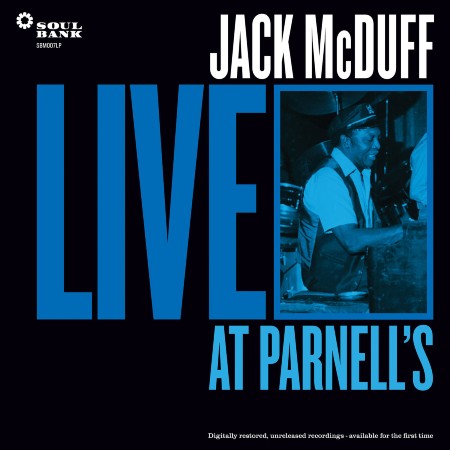