“A young vocalist with an old-school voice!”

DeRobert Adams, the voice in front of the Half-Truths, began his long journey singing in the church choir of Covington, a small suburb of Memphis, 200 miles west of Nashville. It was here that he honed his talent as a powerful soulful vocalist, training to perform vertiginous vocal acrobatics. In 2000, at age 19, and against the wishes of his family, DeRobert packed his suitcase and went to Murfreesboro, a small university town southeast of Nashville, where he enrolled at Middle Tennessee State University. It was here that he met Nick DeVan and David Singleton who later founded G.E.D. Soul Records and shortly after DeRobert & The Half-Truths.

Debut album Soul In A Digital World was released in 2010 and put DeRobert & The Half-Truths firmly on the map, while follow-up I‘mTrying consolidated the act’s standing as one of the most exciting modern funk & soul outfits. In between the two albums, a plethora of singles on G.E.D Soul of course, but also labels such as Colemine, Tramp Records, and recently a brand new collaboration with German label Golden Rules.

One of the key features that makes this music so special is that all the musicians are working class people who make a living with secondary jobs and face the problems that lie in the way. The recurrent themes of poverty, anguish, and the perpetual struggle to stay financially afloat are reflected in the songs. Balancing the rhythmic elements of the old days with the splashes of DeRobert’s modern voice punctuating the melody as a possessed pugilist, each new album adds another layer of sweet soulfulness to its growing repertoire. 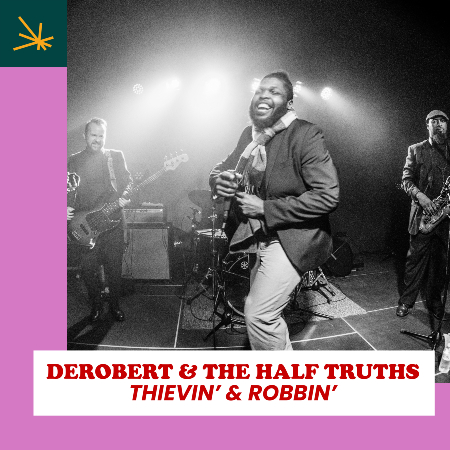