Ladies & gentlemen – please put your hands together for the Olympic Cyclone Band!  “An Alternative Christmas through the eyes and ears of the most lo-fi of hotel lounge bands.”

OCB are one of London’s most in-demand lounge bands, but in between gigs the guys like to hang out and rehearse at the notorious J-Lounge in Acton, West London. Run by the band’s manager, the J-Lounge is a members club so discreet that you must enter through a 24 hour cab office with a series of knocks exactly matching the sleigh bell rhythm in the OCB version of “God Rest Ye Merry Gentlemen”.

This gloomy basement has played host to some of the most exciting parties London has ever seen. No cameras allowed, please hand in your mobile phone at the cloakroom. Nothing is off limits, except violence and being mean, obviously.

It was here that their idea of an “Alternative Christmas” was born. Having gone home at 3AM on Christmas morning following a busy night at the Putney International, the band found themselves back at the club by midday, having no one else to share Christmas with but each other. It started with Simon the Little Drummer Boy whistling wearily and tap tapping on his pint glass with his swizzle stick, and soon the whole band broke into some messed up versions of Christmas standards to keep their spirits up.

Renowned record producers Quincy Sparks and Herb Clayton-Jones were still in the J-Lounge, sleeping off their Christmas Eve over indulgences, and declared the Olympic Cyclone Band‘s mix of soul, funk, jazz and rocked up festive tunes to be the best thing they’d heard since spending 6 weeks in a Chateau in France in 1974 with The Stones.

They also said that they would be willing to invest in recording the bands Christmas album, on the hush hush y’know. Studio time at London’s finest Studio was paid for and “Season’s Greetings” an off kilter take on Christmas classics was born. 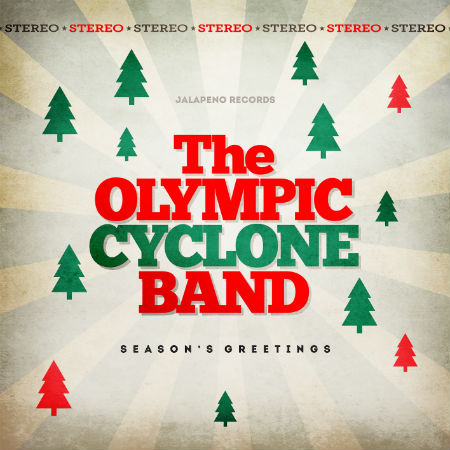