The world is cold, indeed. But thankfully, Cookin’ On 3 Burners bring the antidote with their new single. After the longest touring and recording break in their 24-year history, due to Melbourne’s strict COVID-19 lockdown, Jake Mason (organ), Dan West (guitar) and Ivan Khatchoyan (drums) have finally reunited to cook up a blazing new release. And it’s anything but cold.

Continuing on their tradition of collaborating with guest artists, this new outing partners up Cookin’ On 3 Burners with hip hop icon Mantra and vocalist Jane Tyrell. Spitting lyrics that feel more relevant than ever, “The World is Cold” is a call to fire up; to re-ignite and forge ahead with purpose and conviction.

In true Cookin’ On 3 Burners style, this record sits just as comfortably on an audiophile’s turntable as it does on a B-boy’s Boombox. The B side is an addictive rendition of Mos Def’s 1999 release “Ms. Fat Booty”. A strong return to Cookin’ on 3 Burners roots as an instrumental funk trio, this cut references Aretha Franklin’s 1965 “One Step Ahead” release, the track originally sampled for the Mos Def classic. It follows a suite of super funky interpretations recorded by the band including Gary Numen’s “Cars”, Metallica’s “Enter Sandman“ and Gorillaz’s “Feel Good Inc“.

Cookin’ On 3 Burners are Australia’s finest ARIA-nominated soul trio, receiving the Billion-stream APRA award for their world-wide smash collaboration with French DJ Kungs on “This Girl”. The prolific group have released seven LP’s via labels including Freestyle, Soul Messin’ and Warner and have toured extensively throughout Japan, UK and Europe. Born collaborators, they have recorded with artists such as Tex Perkins, Kaait, Yolanda be Cool, Daniel Merriweather, Stella Angelico and Kylie Auldist.

The antidote to a cold world? Set it on fire with Cookin’ on 3 Burners. 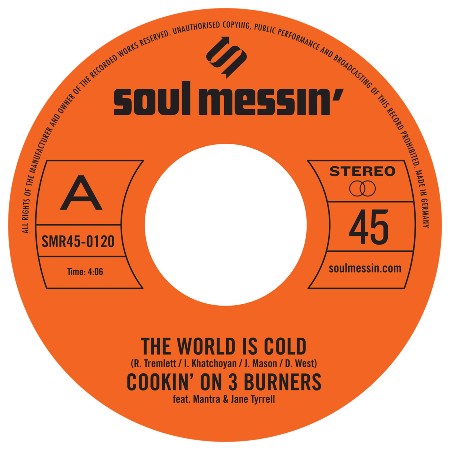