New collabo between E and Mocambo Records on limited edition 45

Mocambo Records proudly presents the first 45 with the unmistakable E (aka Eric ‘E da Boss’ Cooke, and one half of soul duo Myron & E out on Timmion Records and Stones Throw).

E is a multifaceted artist who started out as a DJ and producer and eventually developed into the singer/songwriter we know today. As part of Myron & E he has toured the world but he also has a successful solo career with various releases and collaborations under his belt.

This new single, titled “The Turning Point” is a dramatic piece of soul with dope drums and a cinematic orchestration, which sees E and his female duet partner Ishtar ‘breaking up’, while the flipside features the instrumental version.

This is a vinyl only release, available in limited quantities and as a first taste of the collaboration between E and Mocambo Records. You can buy it HERE.

“The Turning Point” out exclusively on 45 on Apr. 15th via Mocambo 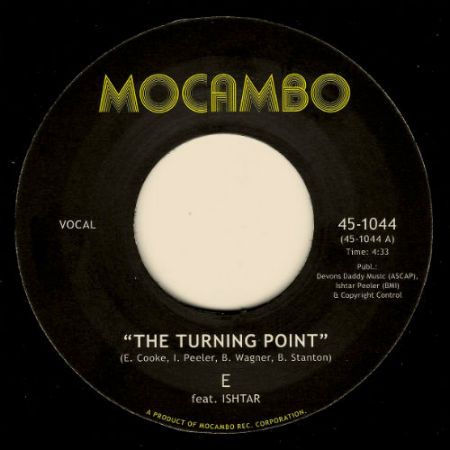