Soul Messin’ Records are back with a limited-edition 7” pressing of “Soulgroove ’66 Pt.I and Pt.II”, with an irresistible slice of swingin’ soul-funk on the A-side and a jazzy groove on the B.

“Soulgroove’66 Pt.I” is sung by Australian soul legend Renee Geyer and features Jake Mason (Cookin’ on 3 Burners) on organ, Danny Farrugia on drums and Yuri Pavlinov (The Bamboos) on bass, playing under the pseudonym of The New Cobras. This original track is a nod to the classic soul and funk sounds coming from the Stax and Motown labels.

Although this is a new release, “Soulgroove’66 Pt.I” has a long history. Composed and produced by DJ/ Producer/Artist Pierre Baroni, the song was broadcast as the opening title theme for his cult radio program on Melbourne’s PBS 106.7FM. Between 2003-2021, on Saturday afternoons from 3pm, listeners were taken on a spiritual road trip through the deep archives of soul, rhythm ‘n’ blues and funk via Pierre’s personal record collection. When artists such as Eddie Bo, Syl Johnson, Betty Harris, Irma Thomas, or Marva Whitney came to town, they dropped into the studio to appear on the program. But even more profoundly, Pierre influenced a generation of Australian soul artists, spawning a thriving community of internationally acclaimed acts such as The Bamboos, Cookin’ on 3 Burners, Saskwatch, Hiatus Kaiyote, The Teskey Brothers and many more.

This limited-edition release celebrates Pierre’s incredible contribution to the global soul community. What is now his final studio work, Pierre’s vision was to create a new recording of “Soulgroove’66 Pt.I” under his composer alias of P. Black. Partnering with Cookin’ on 3 Burners organ player Jake Mason to co-produce the sessions, the song was recorded in mono, giving it a distinctly vintage sound. You could be forgiven for thinking the track is a recording from Memphis in 1966, rather than from a suburb of Melbourne in 2021. The B side, “Soulgroove’66 Pt.2”, is a downtempo slow grind number, designed to be the music bed playing underneath Pierre each week as he thanked the patron members of the Soulgroove ‘66 program.

The official release of “Soulgroove’66 Pt.I and Pt.II” on 7” vinyl, Pierre’s favourite format, is an apt way to remember a soul legend lost too soon. With proceeds of the sales going to PBS 106.7FM, Pierre’s musical home, this limited release is a must have for soul lovers worldwide. 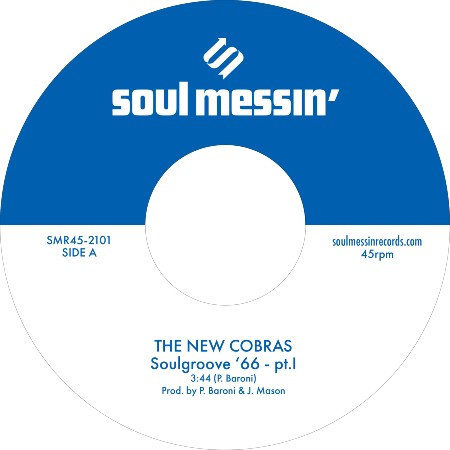