After releasing album “The Way I Am” in 2014 to broad critical and fan acclaim, France-based outfit Cherry Boop & The Sound Makers are back with a new 45 and digital EP, a new sound and fresh Northern vibes.

Blue-eyed girl Cherry Boop has been on a steady upward trajectory through the music stratosphere, collaborating with Bobby Eli (of Philly legends MFSB) and William Hart (of the Delfonics) for album “The Way I Am”, extensively touring Europe to promote it, meeting and touring France with soul man Lee Fields (from Truth & Soul Records), and coming into her own as a young and promising soul singer.

Now able to push her music the way she wants to perform it, Cherry Boop is feeling more ready than ever to create her own personal soul style with a different way of writing and composing music. Spring is the time for Cherry Boop & The Sound Makers to reach and start collaborating with an unexpected UK signature – Andy Lewis. This amazing DJ and producer (member of UK indie legends Spearmint and now playing the bass with Paul Weller) created two fresh tracks with an uptempo, true Northern soul feel and his studio expertise is exactly what Cherry B was looking for.

“No Answer (Andy Lewis Remix)” alonsgide new track “Malala” is released on Légère Recordings in cooperation with Raymuse Recordings as a 2-track 7inch vinyl and 5-track digital EP which includes the instrumentals and original album version of “No Answer”.

Out on Légère Recordings via 45 / Digital download on April 24th 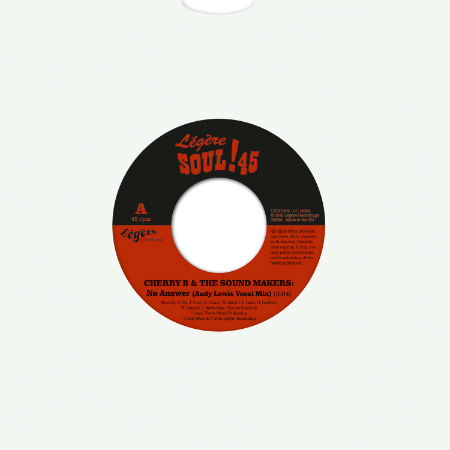