Until he was about 20, Texas-born Melvin Sparks was a rhythm & blues guitarist, backing Jackie Wilson, Curtis Mayfield and Marvin Gaye as a member of The Upsetters. But Sparks gave up his seat on The Upsetters‘ bus in New York City, where a chance introduction to George Benson led him to a place in soul-jazz history. Melvin played and recorded with Lou Donaldson, Leon Spencer, Bernard Purdie, Jack McDuff, Jimmy McGriff, Idris Muhammad, Dr. Lonnie Smith, Charles Earland, Grover Washington Jr., Reuben Wilson and so many more. Even during the quietest years of soul-jazz Melvin stayed relevant through hip- hop and r&b; a quick search at WhoSampled turns up more than 150 samples of his funky chicken scratch. And Melvin‘s legacy is heard in contemporary soul/funk bands like The New Mastersounds, Soulive and The Greyboy Allstars, all of whom he also guested with several times before his early departure from this realm in 2011.

This release documents Melvin‘s final band just months before his death. Organist Beau Sasser and drummer Bill Carbone had been working with Sparks for several years, and, despite the power dynamic – they were in their early 30s, Melvin an elder-statesmen of the genre – the unit was sharp, relaxed and performed Melvin‘s music with a jovial spirit. The trio played the Burlington, VT club Nectar’s regularly, but this night featured two exceptional occurrences. Per the recommendation of Nectar‘s agent they used the Grippo Horns, the only time Sparks used a horn section in the last several years of his life, and they allowed a multi-track recording of the show. Both were strong decisions.

Sparks counts “Whip! Whop!” off at what he said The Upsetters called a “Showtime Tempo”, and peppers it, as well as most of the album, with quotes from jazz standards, pop songs and cartoon themes, all woven effortlessly into the bebop-funk dialect he helped create. He unfolds amiable melodies, patiently and methodically, through his several-minute lead on “Breezin”. And Sparks is audibly uplifted by the Grippo Horns helping him perform his 1973 arrangement of “Ain’t No Woman” for the first time in decades. The tracks on this album, lovingly mixed by guitarist, producer and Melvin Sparks fan Eddie Roberts, demonstrate that Melvin played as well in the final months of his life as at any time, and confirm his position in the pantheon of jazz’s greatest. 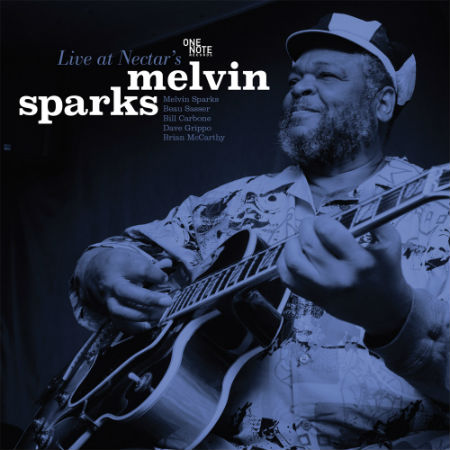