Willwork4funk and Exotique are proud to announce that emerging Italian afro-funk band Funky Mama will be opening for funk legend Martha High in the Roman date of her Italian tour alongside The TC Gang, at Rising Love club on Friday, March 21st, as part of the 4th edition of the Exotique Festival alla Corte di Circe.

Funky Mama made big waves in late 2013 with the release of their self-titled debut EP, which enjoyed worldwide radioplay on programs such as “The Crag Charles Funk & Soul Show” (BBC 6), “Sonideros” (on national Spanish station Radio 3), and “Out Of Spectrum” (the show of much respected German DJ Oliver Korthals on Byte fm). Since then the band has been bringing its heavy dose of afro-funk goodness live around the Italian peninsula, making a name for itself as one of the hot new names of the contemporary funk scene, as anticipation builds around the release of their debut full-length.

Hailing from Washtington DC, Martha High is a soul singer who has accompanied James Brown in his live shows for over 30 years, having also been dubbed by him “The Princess of Soul”. Now 7 years since her last appearance in Rome, the singer is ready to bring the heat to the stage with a selection of classic soul tunes as well as tracks taken from her recent solo releases! 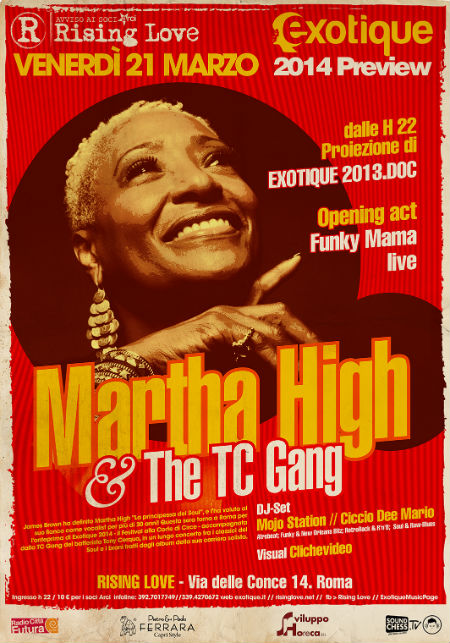