Following the amazing feedback it received after its release in France in May, debut album “The Way I Am” by Paris-based retro soul outfit Cherry Boop & The Sound Makers gets an official European re-release this Fall. “The Way I Am” is an energetic and infectious blend of 60s-flavored funk & soul tracks that were recorded in Girona (Spain) and mixed and mastered in Philadelphia by Bobby Eli of MFSB.

Former dancer and blue-eyed girl Cherry Boop draws inspiration from artists such as Tammi Terrell or Brenda Holloway and it can be felt in her melodies. Add to that a tight backing band in the form of The Sound Makers, original grooves penned by French composer Olivier Pot (with help from J. Barrientos on arrangements) and the unique touch of legendary Philly producer Bobby Eli, and you’ve got a recipe for some stone cold soul wrapped up into 11 irresistible tracks!

“The Way I Am” entirely captures the spirit and sound of the 60s, thanks also to the use of good old vintage microphones, Würlitzer or Glockenspiel. Olivier took his cue from specific recording techniques of fabulous labels such as Motown or Stax, and of course the warm and soulful mood of “The Graveyard”, Bobby Eli‘s studio in Philadelphia, did the rest.

In his studio Mr. Eli also recorded a strings quartet and an amazing duet of Cherry Boop and William Hart, famous singer of The Delfonics, on the cover of Carol Douglas’ modern soul swinger “I Want To Give You My Everything”. This was to become the 1st single which was released in the UK last year.

From upbeat foot-stompers “What I Want” and “Listen”, to the sultry grooves of ballad “Sometimes”, uplifting soul in “I Wanna Start A New Life” or rousing mid-tempo tune “My Weakness”, this debut by Cherry Boop & The Sound Makers will take you to a place where Soul Music no longer belongs to the 60s, but to NOW!!! Have a nice trip. 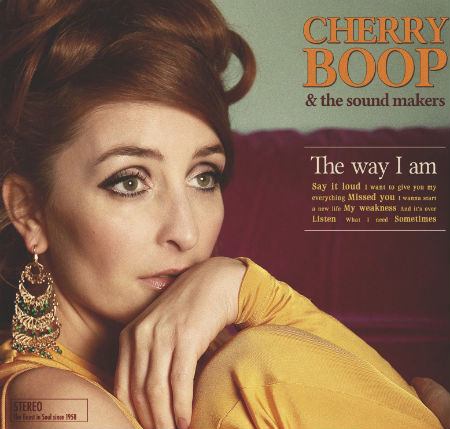