In preparation for the EMAs taking place in Milan, Italy on October 25th, MTV turned the city into a giant music festival the prior week, with events in all corners and neighborhoods of Milan, including a takeover of an entire street, Via Corsico, now re-baptized MTV street, in the renowned Navigli area. It’s here that on Thursday October 22nd Fiesta Ferrero held a special silent disco, with 3 DJs on 3 separate balconies battling it out to win over the public, who chose who to listen and dance to with wifi earphones.

Willwork4funk boss Calamity Jade was one of those DJs, alongside one of fashion’s favorite DJettes Lady Violet and Sony music artist Manuel Rotondo. The silent sonic clash took place from 10:15 pm to 11:00 pm, after which the grand finale was courtesy of Merk & Kremont! 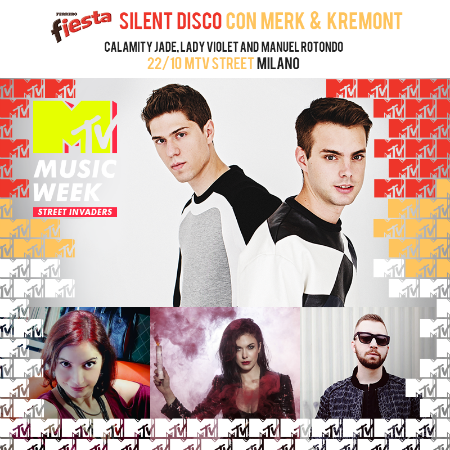