“Ploughing a fertile groove in the key of all things jazz and funk!”

Since forming as a quartet 15 years ago, Speedometer has been at the forefront of the funk and soul scene. Their music has been on the playlist of every funk and soul DJ dropping their heavy funk, latin or soulful beats on dancefloors around the world. Speedometer‘s music has also been the backdrop for countless TV shows and even Hollywood film trailers and has inspired a new a generation of funk bands too.

The early days were small gigs, playing Meters covers and Meters-inspired originals (hence the name). As the attention grew, so did the band, from a quartet up to the 10-piece outfit seen today. On the way, there have been countless singles, a load of albums, collaborations with some of the most legendary names in soul and funk, and tours all over Europe and Japan.

In 2000 Speedometer released their first single “Soul Safari” on Soul Fire Records, the seminal New York label. This was soon followed by a slew of fine limited pressing releases on Timmion and Kennel Klub, which eventually led to the release of debut album “This Is Speedometer” on Blow It Hard Records in 2003, featuring all-girl soul vocalists The Speedettes. Follow-up full-length “This Is Speedometer Vol.II” which once again featured The Speedettes came out on again on Blow It Hard in 2005, the same year of Speedometer‘s opening release for Freestyle with a blistering funk cover of Beyonce’s “Work it Out” with Ria Currie on vocals, released on 7 inch.

The partnership between Speedometer and Freestyle Records was to be a fruitful one, with a rapid succession of full-lengths, beginning with “Four Flights Up” from 2007. This was followed by “Soul Groovin – Speedometer Live” in 2009, and studio albums “The Shakedown” in 2010, “Soul Overdue” with the collaboration of funk diva Martha High in 2012 and “No Turning Back” featuring singer James Junior in 2015.

Over the years, Speedometer have worked with a host of US funk legends including Joe Quarterman, Eddie Bo, Marva Whitney, Martha High, Sharon Jones, James Bell (Highlghters), Lee Fields, Billy Wooten and Robert Moore. All were blown away by Speedometer‘s authenticity and dedication to faithfully creating that original soul-funk sound.

The band’s new full-length “Our Kind Of Movement” is the 5th studio album that Speedoemeter release on Freestyle Records and is sure to be another cornerstone in their prolific career spanning over 2 decades. 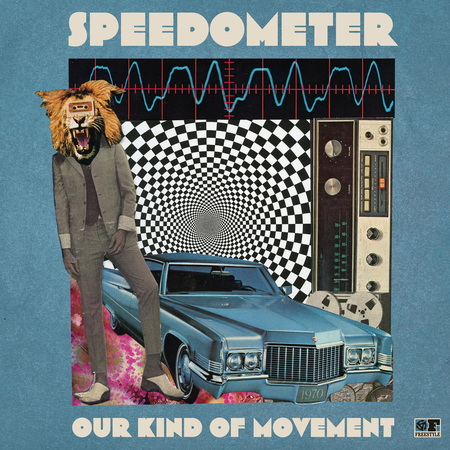