“One of the very best soul voices i’ve heard for a very long time!”

J.P. Bimeni is a Burundian-born, London-based singer, a royal refugee turned soul survivor with a voice laced with pain, yearning and soul, who plays with Spanish funk outfit The Black Belts.

A descendant of the Burundian royal family whose parents held opposing political views, Bimeni escaped his country aged 15 during the 1993 civil war and genocide. Following multiple attempts on his life, including being poisoned by doctors in hospital, he was given refugee status and fled to Wales. Soon after Bimeni’s arrival at Trinity College in Wales, a school for children who have escaped conflict and where he received a United Nations organised scholarship, Bimeni gravitated toward the music of Ray Charles, Bob Marley, Marvin Gaye and his idol, Otis Redding.

As a self-taught musician, he has been part of a multitude of bands and projects since 2002. Mantilla Band in 2003; his first solo EP Slow Me in 2008; the hit “Agahengwe” sung in his native language; the band Lostchild with whom he reached the semifinals of the Emergenza Festival in 2010; a solo concert for the 60th anniversary of Acnur in 2010; the rock-soul band Saints Patience; or the tribute to Otis Redding with Jezebel Sextet.

All this brings us to The Black Belts, a band of 6 renowned musicians of the Madrid scene (Rodrigo Díaz on drums, Pablo Cano on bass, Fernando Vasco on guitar, Álex Lárraga on keys, and Ricardo Martínez and Rafael Díaz on trumpet and saxophone respectively). Formed in the studios of TucXone Records, they hooked up with J.P. Bimeni and started recording and performing together.

J.P. Bimeni & The Black Belts‘ debut album Free Me was released on TucXone Records in 2018, and went on to become BBC6 Music‘s “Album of the Year”. The full-length is overflowing with ‘swamp soul’; guitars, keyboards, a section of brass, and the enveloping voice of Bimeni, all exquisitely fine-tuned to make you dance to the beat of rhythm’n’blues. “My music is an exploration of my emotional journey to self-discovery and healing.” Bimeni says. “I feel blessed to have survived and keep moving”.

Amid a global pandemic and the looming threat of a third world war, J.P. Bimeni & The Black Belts provide a much-needed dose of optimist with their sophomore album Give Me Hope on Lovemonk Records, where the artist offers a deep reflection on the need for unity, amid driving funk jams, infectious rhythm n blues, gospel sweetness and driving soul. 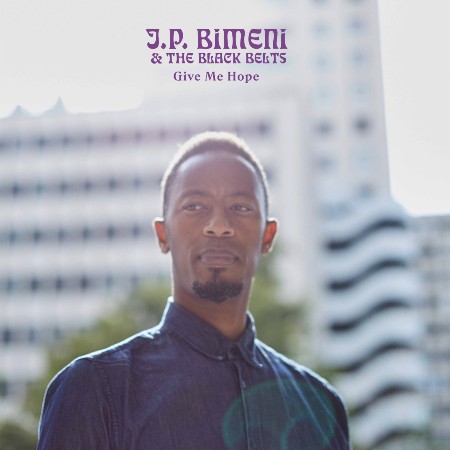