“Modern disco at its finest!”

Born in the States but based in Madrid, Spain, Casbah 73 aka Oli Stewart is a full-spectrum DJ, music producer & vinyl dealer specialized in groovy sounds spanning disco, soul, jazz and house. His productions have received enthusiastic plaudits from such renowned figures as The Black Madonna, Dimitri From Paris, Danny Krivit, Craig Charles, Red Greg and DJ Rahaan, just to name a few.

Oliver grew up in Madrid, where he developed a passion for music from an early age. He moved to Glasgow in the late ’80s coinciding with the explosion of rare groove, Chicago house and the whole warehouse scene. This was his first taste of black music and duly inspired, he was soon DJing, organizing one-offs and parties and playing a mixture of funk, disco, NY garage and early house. By ’91 he was buying vinyl big-time and secured a Saturday night residency known as The Casbah, playing heavyweight jazz-dance, latin jazz and new funky sounds.

As his DJing and record buying rapidly increased, Oli soon realized how difficult it was to get hold of those elusive sounds. Initially the plan was to buy/sell enough to keep himself in new tunes, so he set up Casbah Records and before long his lists took off to strong interest worldwide. The selection was roots: jazz, funk, soul, fusion, latin-jazz, bossa and disco. Always on the lookout for those hot ‘new discoveries’, he scoured the most unlikely second hand shops and markets from the Americas to Asia. His growing reputation as a premier digger brought him into contact with many of the more foward-thinking DJs and producers on the scene. Anyone in search of these rare vinyl gems over the last fifteen years has probably come across one of Oli‘s famous lists, as Casbah Records is considered one of the most respected rare vinyl mail order services out there.

For years Oli has travelled the world and his 15,000+ rare record collection documents many of black music’s best moments. With time, he started to concentrate more on production, experimenting with mixing beats and live instruments and, after growing tired of Scottish weather, he decided to move back to Madrid and set up his studio, where he is now producing tracks full time. His two first singles, “Cabo Verde Strut” and “The Way I Am” saw strong support from DJs around the globe and his debut album “Moods & Grooves” was released in 2005 on Hitop Records. Next came compilation “Jazz Travels”, featuring rare jazz and deep musical treats from around the world, followed by sophomore album “Pushin’ Forty”, both again on Hitop.

In the meantime Casbah 73 had been working with a full band of top notch singers/musicians with whom he committed to vinyl one of the hottest disco joints of 2018, the insatiably funky “Love Saves The Day” released on Lovemonk Records. For his 2019 follow up he composed and recorded a double AA side of disco/soul & killer jazz-funk “To Be Free” / “Doing Our Own Thing” which has been slaying dancefloors worldwide. February 28th 2020 sees the release of his brand new 7″ single “Sweet Maybe feat. Bart Davenport“, a driving slice of modern soul-disco on the A side, while the “Synthstrumental” version on the flip is in full-on disco-funk mode.

Casbah 73‘s sets give you a true sense of who he is: a DJ who lives and breathes music, making full use of his encyclopaedic knowledge to combine the new and the old with a signature electicism that comes naturally. Fun, fresh, passionate, always unpredictable and with a style all his own, combined with a strong sense of intuition for the dance floor, forged in a decades long career behind the decks. As well as regular residencies in Madrid, he has also performed at several music festivals recently, including the S.O.U.L. Weeekender, Elektronikaldia & Sonar Festival. 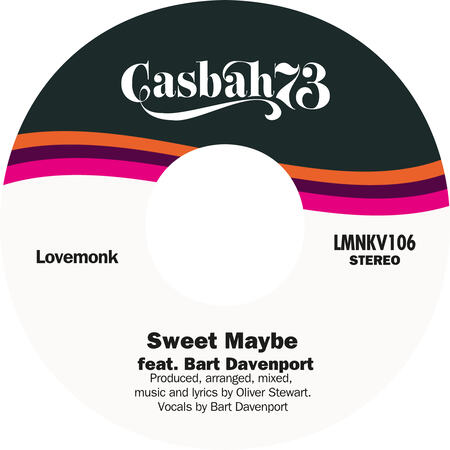