To celebrate the forthcoming release of their new album, Excursions in Soul, Reggae, Funk & Dub, Guillaume Metenier’s Soul Sugar collective has digitally reissued Sly and Robbie’s superb mixes of  “I Want You”, a sensual reggae-soul cover of the Marvin Gaye classic that first appeared on vinyl back in 2018.

“I Want You” is a superb example of the collaborative methods of the Soul Sugar collective, who provide a timeless cover blessed with effortlessly soulful vocals courtesy of Jamaican native Leonardo Carmichael. The instruments and vocals were recorded in studios on different sides of the Atlantic (Robbie Shakespeare’s bass in Miami, Sly Dunbar’s drums and Carmichael’s vocals in Kingston, and Metenier’s organ and Thomas Naim’s guitar in Paris), with mixes being bounced from the Caribbean to Europe before being finished off at frequent collaborator Jahno’s studio in Clermont-Ferrand.

The results are quite simply exemplary. Sly and Robbie’s vocal mix is reminiscent of the legendary duo’s work during their golden period at Channel One studio in Kingston, Jamaica or the Compass Point studio in Nassau, the Bahamas, with Carmichael’s warming, Gaye-like lead vocal rising above Naim’s clipped guitar licks and Metenier’s tasteful keyboard lines.

The accompanying dub mix is a special digital exclusive to this release and is not included in the upcoming album. The dub version is naturally faithful to the skeletal, rhythm-driven and effects-laden Jamaican blueprint, with individual instrumental and vocal snippets echoing across the sound space above a sturdy, dancefloor-ready rhythm.

“I Want You” is one of a number of superb reggae-soul covers featured on Excursions in Soul, Reggae, Funk & Dub, the fourth album by Soul Sugar. The set gathers together a mixture of unheard cuts and previously released (but now hard-to-find) vocal and instrumental numbers that the collective has released on different formats over the last few years. It will be released by Gee Recordings on June 4th. 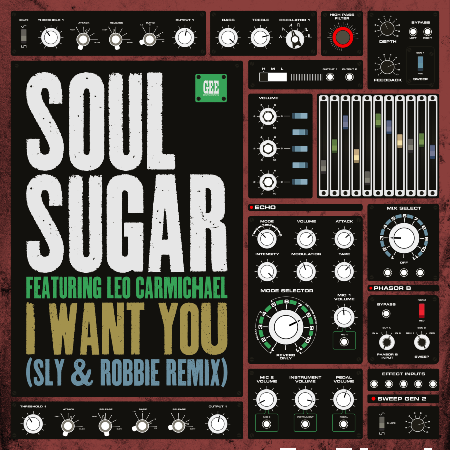